Biden Pulls Away In Race For Billionaire Donors

With less than 100 days until the election, Joe Biden has received donations from 131 members of the upper crust, while Donald Trump has gotten donations from just 99 of his fellow tycoons, according to an analysis of Federal Election Commission filings.

Biden’s supporters include political power players like George Soros. Soros gave $505,600 to Biden’s joint fundraising committee with the Democratic National Committee in May. Soros has spent over $8 million this election cycle on other causes so far.

At Least 36 Billionaires Made Six-Figure Contributions To Committees Supporting Joe Biden In The Last Three Months.

Billionaire Jeff Skoll, who was eBay’s first full-time hire, also gave $620,600 between May and June.
Skoll, who was born in Canada and became an American citizen in 2007, is spending far more on this election than he ever has before.
Not including his donations to the Biden committees, he gave $4.5 million in May and June to super-PACs supporting Biden and Senate Democrats.

Trump’s new contributors, meanwhile, include a couple of Republican stalwarts, Bernard and Billi Marcus, who gave a combined $721,200 in May.

gordyfl
Honored Social Butterfly
Biden Leads Trump with Billionaires
good news!!!!!
~~~~~~~~~~~~~~~~
That's what Democrats said in 2016 when Hillary outspent Trump nearly 2 to 1. Billionaires also supported Her in 2016.
The largest Wall Street investment banks are Goldman Sachs, JPMorgan, Morgan Stanley, Bank of America, and Citigroup.
Which presidential candidates did these firms and the people associated with them favor?
According to OpenSecrets.org:

That’s among candidates. In some cases, the largest single recipient of donations was a party committee or host committee.

In no case was it the Republican party committee:

And the Trump campaign is nearly out  of money compared to Biden.

The Democrat Billionaires are really helping Biden to win.

Trump is emailing millions of people a chance to win a "free" expense paid trip to the debates, with a donation, of course.

There are a handful of Democrats who refuse to take money from Wall Street, and refuse to hold big-money private-fundraisers. They refuse to have PACs and Super PACs where corporate executives can give unlimited amounts of money to the candidates. Trump calls those members of Congress "The Radical Left". 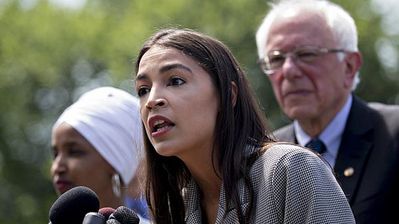 They model themselves after Franklin Roosevelt....

So then some of the things you think are wrong.

jimc91:  I thought you guys hated the rich people...

You thought wrong, but this isn't a case of who loves/hate rich people, it's rich people tired of the incompetent clown Trump. They want stability and normalcy.

Biden has the billionaires who own the tech and Amazons of this country on his side, because Trump will never win in NY or California.

Trump does have the failing oil industry on his side, but Jeff Bezos and Elon Musk could buy them tomorrow and shut down Saudi Arabia, if they wanted to, and mass  produce electric cars.

Biden has bright, informed billionaires on his side who care about this country's future, not Russia.

As is often the case, "you guys" assume wrong. A lot of wealthy people have seen what trump has done to this country and aren't having it any more.  Good for them.


"FAKE 45 #illegitimate" read a sign at the Woman's March in DC, 1/27/2017
4 Kudos
424 Views
0
Share
Report
Reply
Turn on suggestions
Auto-suggest helps you quickly narrow down your search results by suggesting possible matches as you type.
Showing results for
Show  only  | Search instead for
Did you mean:
Users
Announcements