Actually, I thin the argument is that Christians are lovely people IF they follow the teachings of Christ.

And it goes on to say killing babies and being a liberal - that seems a bit much. Do you find that in King James or another version?

Actually, I thin the argument is that Christians are lovely people IF they follow the teachings of Christ.


"Christians are lovely people IF they are politically left and approve of baby killing."

Right-wing Christians are all racist. That’s what the BBC’s ‘Good Morning Ulster‘ programme proclaimed last week on the run-up to the Royal Wedding as they discussed the impending union of whitey Prince Harry and mixed-race Meghan Markle. Comedian Nuala McKeever quipped: “I do laugh to think ‘I wonder how a lot of right-wing Christians are coping with fact he is marrying a black divorcee’.”

She wasn’t sneering at Christians, note: left-wing followers of Jesus are some of the loveliest people on the planet, if not the loveliest. It was those bigoted, Brexit-supporting, gay-bashing, abortion-loathing, Trump-adoring, Thatcher-worshipping right-wing Christians – you know, those lemon-sucking, finger-jabbing puritans who understand everything about God and own every Christology and know all the theology there is to know because it’s all right there in black-and-white in the Bible.

But right-wing Christians don’t like the ‘black’ bits of the Bible: no, they only do the white because therein lies purity and holiness, perfection and sinlessness, justice and judgment. They don’t do much compassion or mercy, because, well, that’s just mush: God is love, sure, but He is a very, very particular kind of love, and He wants that love very properly defined and if you don’t get the right definition you’re going to hell.

These right-wing Christians are passionate about purging and smiting, cleansing and condemning: it’s all so much more satisfying that feeding the hungry and housing the homeless. They’ve never noticed that the Church is made up of different races, different classes and different cultures: they are all so wrapped-up in their comfy middle-class white-supremacy theology that the thought of Jesus being brown simply never occurred to them. As long as men marry women and those women submit to their husbands and make sure they change the nappies and do the ironing and get dinner on the table all shall be well, for therein lies domestic harmony and marital contentment as the Lord ordained.

And never forget that they reflect the image of God: their morality has been tried and found impeccable; their witness of truth infallible. These right-wing Christians reflect the natural order of domination and submission in the name of Christ. They conspire with capitalism to construct a global utopia of economic, political, spiritual and psychological control for the good of all mankind. If you’re not with it, you’re against it. Your rights and freedoms are defined in and by the Word of God, and if you follow that to the letter you shall know a thousand blessings, but if you disobey, you shall be cursed by greed and gluttony, self-absorption and sexual perversion.

Right-wing Christians don’t like self-righteous womanist comedians, because the right doesn’t do joy: dourness is divinity; happiness is heresy. They loathe liberals, deplore progressives and view all expressions of worldly fraternity with deep moral concern. They love their right-wing brothers and sisters, of course, because, well, they are right: they are discerningly fundamentalist, kosher and orthodox about every jot and tittle of Scripture. Authoritarianism is God’s way and moralism is Christ’s way. They revel in adversarial relationships because if you hate them it is a sure sign that they are right, because Jesus warned that the world would hate them because of Him, so the more they are hated, the closer they are to God.

And right-wing Christians have no truck with people of other faith traditions, whatever the colour of their skin. To cultivate cross-cultural relations is to corrupt God’s plan of social order: there can be no truly mutual relation with foreign beliefs or tribal customs, for these are primitive and inferior. To be right is to be faithful; to be a right-wing Christian is to be……loving, creative, liberating, healing, prophetic, resisting, reflecting the incarnate Spirit of Jesus who was not and is not contained solely in any man-made philosophy or political ideology or narrow theology; and whose gift of salvation is completely colour-blind. He even has time for mean-spirited comedians.

Of course, there is Fox. I guess Limbaugh will be next.  You may be right given their bigoted views are  so similar and predictable.

Some just have a need to share their foolish ignorance....
(rkIDSAR)

Yep, that's what this announcer did alright !!

I suspect that was not who was being referred to.

And once again your suspicians haven't served you well.

Pretty pathetic, Cent. Looks like there are some "very fine" racists all over the world.

That is a terrible thing to say. There are no fine racists.

Then why, in reference to the KKK and those protesting them in Charlottesville, did trump say "there were fine people on both sides"?

You know that is not true but just have to play "follow the leader".

Pretty pathetic, Cent. Looks like there are some "very fine" racists all over the world.

That is a terrible thing to say. There are no fine racists.

No duh. That's why much of this nation, and, indeed, much of the world, was so shocked when the president described the Nazi side of the Charlottesville protest as "very fine". You know many "very fine" Nazis? Apparently Trump does. And it's that same brand of ignorance and hate that this fool in Britain so eagerly displayed to the world when he attacked a child's ethnicity.

Duh - no he didn't and I suspect you know it but it is a required meme, and that is a terrible way to have to live.

If by "meme" you mean quoting the president directly, then yes I do! And just because you blame your lying eyes and ears, the rest of the world took notice. I'm not posting the video again. I'm not posting the transcript again. The Nazis were the ones who organized the protest, it was the protest Trump was referring to when he called them "very fine", and the fact that it won't go away so the alt-right can stop trying to defend Trump for his comments, is that THE TRUTH WILL NEVER GO AWAY!

(CNN Business)BBC radio broadcaster Danny Baker has been fired after posting a racist tweet about the Duke and Duchess of Sussex's new baby.

On Wednesday, the BBC Radio 5 Live presenter tweeted a black and white photo of a man and woman holding hands with a chimpanzee in a suit and a top hat, with the caption, "Royal baby leaves hospital."
Amid widespread accusations of racism, Baker deleted the tweet and said he was sorry the "gag" had "whipped some up." He claimed the connotations had not occurred to him because his "mind (is) not diseased."
In a second message, Baker said that the tweet was "supposed to be a joke about Royals vs circus animals in posh clothes but interpreted as about monkeys & race, so rightly deleted. Royal watching not my forte." On Thursday, the broadcaster said he made an "enormous mistake."
A BBC spokesperson said: "This was a serious error of judgment and goes against the values we as a station aim to embody. Danny's a brilliant broadcaster but will no longer be presenting a weekly show with us."
Baker responded defiantly to the decision, saying on Twitter that the calls for his dismissal were a "masterclass in pompous faux-gravity" and that the BBC "literally threw me under the bus."
Prince Harry and Meghan's newborn son, Archie Harrison Mountbatten-Windsor, was born early on Monday morning. On Wednesday, the Duke and Duchess of Sussex presented the baby, their first, to the world in front of selected media.
In a significant milestone for British society, the newborn has made history by becoming the first biracial child in the royal family. 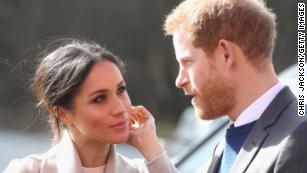 Analysis: Don't use the royal birth to trot out a dangerous myth
Since the announcement of her pregnancy, Meghan has been a target of racist abuse across social media.
In March, Kensington Palace staff announced they would devote more resources to deleting comments targeting the Duchess of Sussex, and to blocking abusive Twitter and Instagram accounts. The royal household also issued a set of guidelines for people engaging with its social media channels. 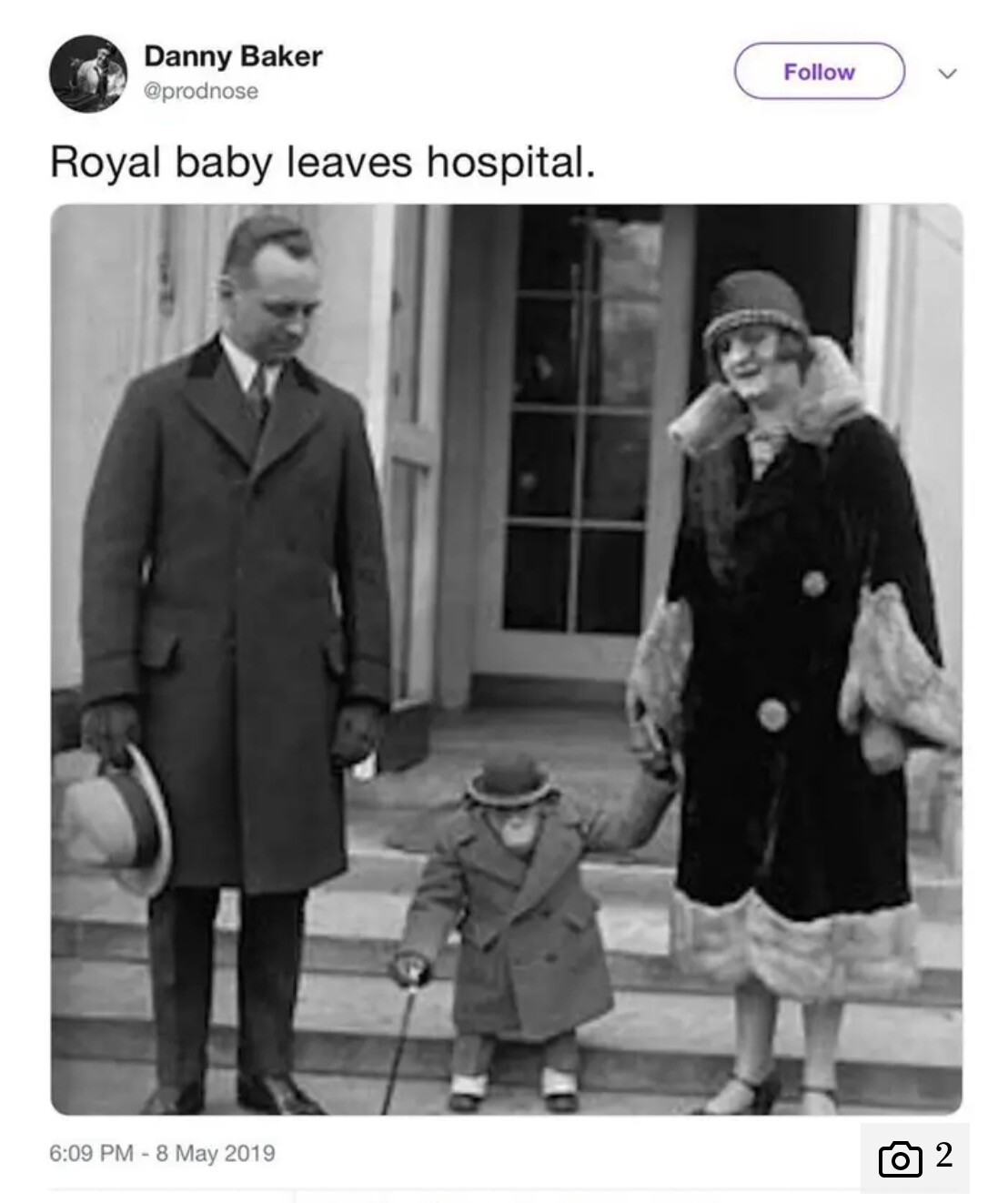 BBC radio host fired for 'racist' picture
Some just have a need to share their foolish ignorance....
(rkIDSAR)

Yep, that's what this announcer did alright !!

I suspect that was not who was being referred to.