The Republican-controlled Senate on Wednesday afternoon confirmed Lawrence VanDyke to the 9th Circuit Court of Appeals, marking President Trump's 50th successful appellate court appointment in just three years in office, and his second to the historically liberal 9th Circuit in as many days.

By contrast, President Barack Obama nominated a total of 55 circuit judges who were confirmed over eight years -- and Obama's nominees were, on average, approximately ten years older. The White House has dramatically transformed the 9th Circuit, a powerful court with jurisdiction over nine states and Guam that has long been a thorn in the president's side.

VanDyke's confirmation, by a 51-44 vote, came just 24 hours after Patrick Bumatay, an openly gay Filipino man, was also seated on the San Francisco-based 9th Circuit. Both nominees were fiercely opposed by Democrats, including the senators from their home states -- Nevada Sens. Jacky Rosen and Catherine Cortez Masto for VanDyke, and California Sens. Dianne Feinstein and Kamala Harris for Bumatay. 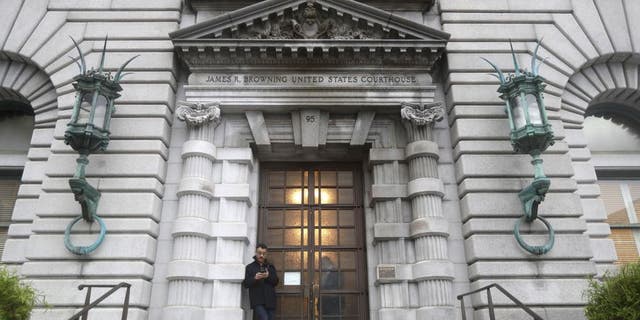 The 9th Circuit Court of Appeals in San Francisco has long drawn the ire of President Trump, who has called it "disgraceful." It's now being transformed. (AP)

But, the White House has long ignored the so-called "blue slip" process of seeking advice from home-state senators in the judicial confirmation process, as it pressed ahead with its goal of transforming the federal appellate bench for generations.

The confirmations have not been easy for the White House -- or its nominees. VanDyke, a deputy assistant attorney general in the environmental and natural resources division, broke down in tears during a Senate Judiciary Committee hearing in October, as he disputed suggestions that he would not be fair to members of the LGBTQ community.

The ostensibly nonpartisan American Bar Association (ABA), which rated VanDyke unqualified, sent a letter to committee leadership alleging that people they interviewed expressed this concern, and that VanDyke himself "would not say affirmatively that he would be fair to any litigant before him, notably members of the LGBTQ community."

“There was a theme that the nominee lacks humility, has an ‘entitlement’ temperament, does not have an open mind, and does not always have a commitment to being candid and truthful,” the letter added.

The ABA did note that VanDyke, a Harvard Law School graduate and former solicitor general for Montana and Nevada, is "clearly smart." VanDyke is a former Nevada solicitor general who also waged an expensive campaign for a seat on the Montana Supreme Court in 2014.

"I did not say that," VanDyke told Sen. Josh Hawley, R-Mo., tears welling up in his eyes. "No, I did not say that. I do not believe that. It is a fundamental belief of mine that all people are created in the image of God. They should all be treated with dignity and respect, senator."

VanDyke also said that he was not given a fair opportunity to respond to the allegations during his ABA interview. He said when he was confronted with the concerns about his views, he began to answer but was told they were running out of time, and described himself as “much more hurt than I’ve ever been to get that” assessment from the ABA.

That interview was conducted by Marcia Davenport, the lead evaluator. Hawley noted that Davenport once contributed to the campaign of a judicial candidate who was running against VanDyke.

VIMTSTL
Report Inappropriate Content
Tags (5)
1
Kudos
448
Views
0
Replies
Reply
1 Kudo
Turn on suggestions
Auto-suggest helps you quickly narrow down your search results by suggesting possible matches as you type.
Showing results for
Show  only  | Search instead for
Did you mean:
Users
Announcements