easyed598:  Go for it -but let`s make it public rather than secret hearings behind close doors.

You seem to have swallowed the lie that Republicans are shut out of the depositions being taken, but there are three committees involved with 47 Republicans as members. They get to bring in their own counsel and ask all the questions they may have with equal time being given. In fact, this is the same procedure Republicans used during the Benghazi hearings. What's your problem?

Anyway, better be careful what you wish for because if you think you're unhappy now wait until this is all aired in public hearings where America gets a good look at what Crime Boss Trump has been up to.

About the only thing the Clinton and Trump impeachments have in common is the word "Impeachment". Bill Clinton was impeached because he lied about having had sex with a consenting adult.  Most Americans at the time thought that was hardly an impeachable event as it had nothing to do with running the government.  During the impeachment process, Clinton created a group to deal with the hearings so as not to be distracted and then was seen to be doing the nation's business the entire time. He had already balanced the budget and improved the economy. Trump has responded to his impeachment with chaos, confusion, whining, and obfuscation. He has managed to offend blacks ("lynched") and evangelicals ("I am like Jesus").

The 2020 election is the Democrats to lose.

Deny, Distract, Discredit.  It's all that trump supporters have !

Someone, somehow leaked Taylor’s opening statement to the media — and, gee, we can only sit here and imagine who that might have been.

Oh my.....factual information was shared with the public.  Good Lord, better march down to the chambers, eat pizza and look foolish to the rest of America.  The Repubs look as ignorant as trump..... 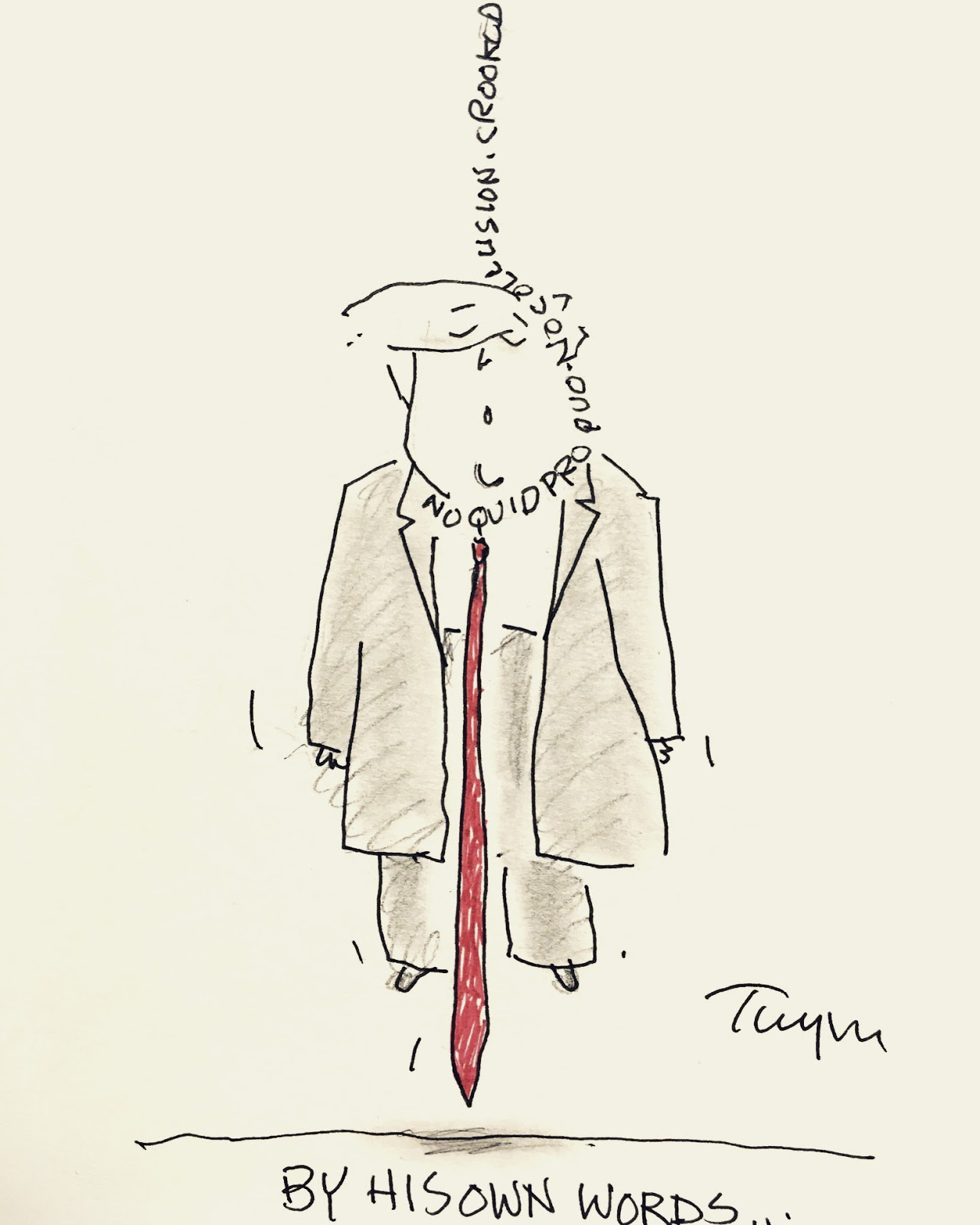 The more often he uploads these kind of smear threads, the more desperate he is. In other words, Trump World is in a state of desperation because they're  terrified at the possibility of their Supreme Leader finally being held accountable for his actions and probably going to be impeached.

That is not hyperbole, those are the headlines — “smoking gun.”

So here we are again with Russian Collusion 2 in full swing, with the WALLS CLOSING IN ON TRUMP, and all of it backed by a coordinated news cycle about how President Trump is toast, done, over and out, corrupt and kaput fer realzies this time. Except…

Once again, it’s all fake news (but you knew that).

Even though Schiff’s secret impeachment inquiry is supposed to be secret, leaks to the far-left CNN-NYTimes-WashPost geared for the Get Drumpf! crowd are currently being reported everywhere without a hint of scrutiny from the media, unaware or unashamed of being so obviously manipulated by the Schiff Cabal.

Someone, somehow leaked Taylor’s opening statement to the media — and, gee, we can only sit here and imagine who that might have been.

Meanwhile, even though we are talking about a process designed to overturn a national election, the accused — President Trump — has no rights, nor do his surrogates among House Republicans. They are not only restricted from calling their own witnesses, which is unprecedented in the history of impeachment, they cannot even publicize their side of the story without violating Schiff’s fascist rules.

Worse still, while Taylor’s opening statement is leaked to the media, this one-sided document from a career diplomat who obviously despises Trump, the transcripts and recordings of his entire testimony remain hidden, guarded, secreted away… And the so-called media are perfectly fine with this, perfectly happy to publish what Schiff wants them to publish, even though they know it does not tell the full truth.

And in the specific case of Taylor, according to three Republican Congressman who were in the room, the testimony Taylor gave that completely undercuts the narrative about his “smoking gun” opening statement remains hidden from the public, and we are now stuck with an incurious press that just doesn’t want to hear the full and inconvenient truth.

Appearing with Sean Hannity on Fox News after Taylor’s testimony, Rep. Devin Nunes (R-CA) said, “The truth is, in two minutes, John Ratcliffe destroyed this witness. There is no quid pro quo.”

Earlier in the day, Rep. Ratcliffe (R-TX) himself verified this while complaining (justifiably) about how he is restricted from revealing the full truth of what happened. He did, though, say what he felt he could:

I found [Taylor] to be very forthright. He had very strong opinions about Donald Trump’s approach to foreign policy. But again, the mainstream media reporting that he provided evidence of a quid pro quo involving military aid is false. I questioned him directly on that. And under [House Intelligence Chairman] Adam Schiff’s rules I can’t tell you what he said, but I can tell you what he didn’t say. And neither he or any other witness has provided testimony that the Ukrainians were aware that military aid was being withheld. You can’t have a quid pro quo with no quo.

Using Twitter, Rep. Mark Meadows (R-NC) said of Taylor’s testimony and the lapdog media’s coverage of it… “The leaks out of today’s witness interview have been laughably overblown and don’t tell the full story. Still no evidence of quid pro quo. Much of the statement and hearsay allegations didn’t hold up against any real scrutiny. The FULL transcript should be released immediately.”

This has been the cycle since the beginning of Schiff’s Star Chamber: The worst possible testimony is leaked out of context, and it sounds awful — at least until we get the other side of the story, where we inevitably learn that this whole thing is going nowhere, that all the evidence points to there being no quid pro quo, to us learning how Schiff is badgeringwitnesses to say what he wants.

So we are currently enjoying a remarkable time in history where congressional Democrats are looking to overturn a presidential election using secret testimony backed by selective leaks, and the national media are colluding with them as if this is all normal and okay.

VIMTSTL
Report Inappropriate Content
Tags (5)
2
Kudos
486
Views
28
Replies
Reply
2 Kudos
Turn on suggestions
Auto-suggest helps you quickly narrow down your search results by suggesting possible matches as you type.
Showing results for
Search instead for
Did you mean:
Users
Announcements