Gee, I miss having a real President.

It reminds me of the GWB who ran on the "compassionate conservative" label.   He spoke some Spanish, which was an inclusive gesture.   As much of a failure as No Child Left Behind was, he at least tried to help kids across the spectrum regardless of socio-economic status.  And let's not forget about the completely unfunded mandate for Medicare Part D prescription drug coverage, that was shored up (and is still shored up) by risk corridors, much like the ones the GOP refuses to fund for Obamacare.

And I will forever be grateful to him during the 9/11 disaster for repeatedly saying Islam is not the enemy.

Now, all the war stuff?  Not a fan and never will be.  He was definitely too hawkish and too conservative for me.  But there was a humanity there I could respect.    Something that is so obviously missing from today's president and GOP.

Trump is chastising  Dubya for speaking out on this but not coming to his defense during his impeachment. Did Trump ever consider Dubya was in favor of his being impeached?

Doncha know it's all about him? 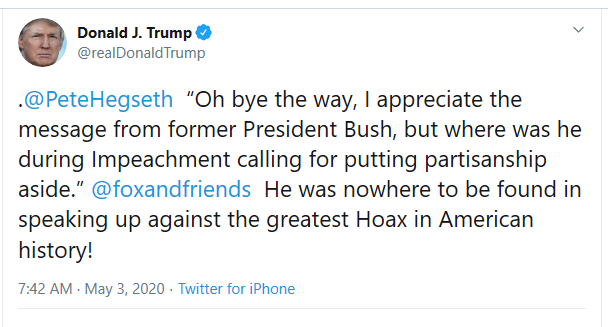 How dare George talk about American unity during a crisis and not even mention poor Donnie's impeachment?!  The unfairness of it all!  🤦‍♀️

IMPOTUS really doesn't get it, does he?  Frigging moron! 🤡 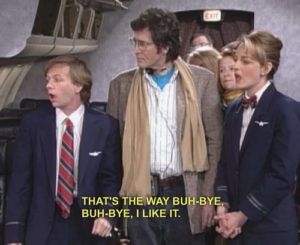 Thank you for sharing this; I wouldn't have seen it otherwise, as not a Bush fan, but consider this a beautiful piece and inspiring, especially when the one currently in charge is so devisive.

Everyone should watch this video; it is important to remember who we are and I feel this video does that...

Very strong, very meaningful, the very opposite of the current WH occupant.
There’s no way on God’s Green Earth that trump would have it in his heart and soul to convey a message like that. All that trump can do is to convey fear and divisiveness.
Is that what we want as a leader in trump, or more importantly, is this the type of leadership that we are willing to put up with!

Gotta admit - jr cleans up pretty nice with this video.  But lets not forget this is the OTHER gutless draft-dodging preppytwit the Republicans put in the White House, and without Putin's Psy Ops warriors we'd have competent and capable President Clinton and jrbush would still be the worst and dumbest man every to hold the office.

People, we must stop electing gutless draft dodging preppytwits, last time one who was also a psychopathic moron who couldn't even operate a casino at a profit.

And there you have it.  It doesn't matter what party you represent, how unpopular (or popular you perceive yourself to be), during times of crisis, there's a big difference when you talk to the American people instead of just your base.  There's a big difference with encouraging unity instead of sowing discord and encouraging a select few to "liberate".

3 Kudos
1,251 Views
0
Share
Report
Reply
Turn on suggestions
Auto-suggest helps you quickly narrow down your search results by suggesting possible matches as you type.
Showing results for
Show  only  | Search instead for
Did you mean:
Users
Announcements