Likely Democratic presidential nominee Joe Biden has a problem beyond his gaffes, the new focus on a sexual assault claim, and the lack of superstar progressive endorsements.

Much like Hillary Rodham Clinton in 2016, his supporters aren’t hugely excited about voting for him.

And according to the latest Emerson College Polling’s survey, Democrats appear to be throwing in the towel. While Biden leads President Trump in a head-to-head matchup, 48%-42%, when voters overall were asked who they really think will win in November, it’s a Trump blowout, 57%-43%. 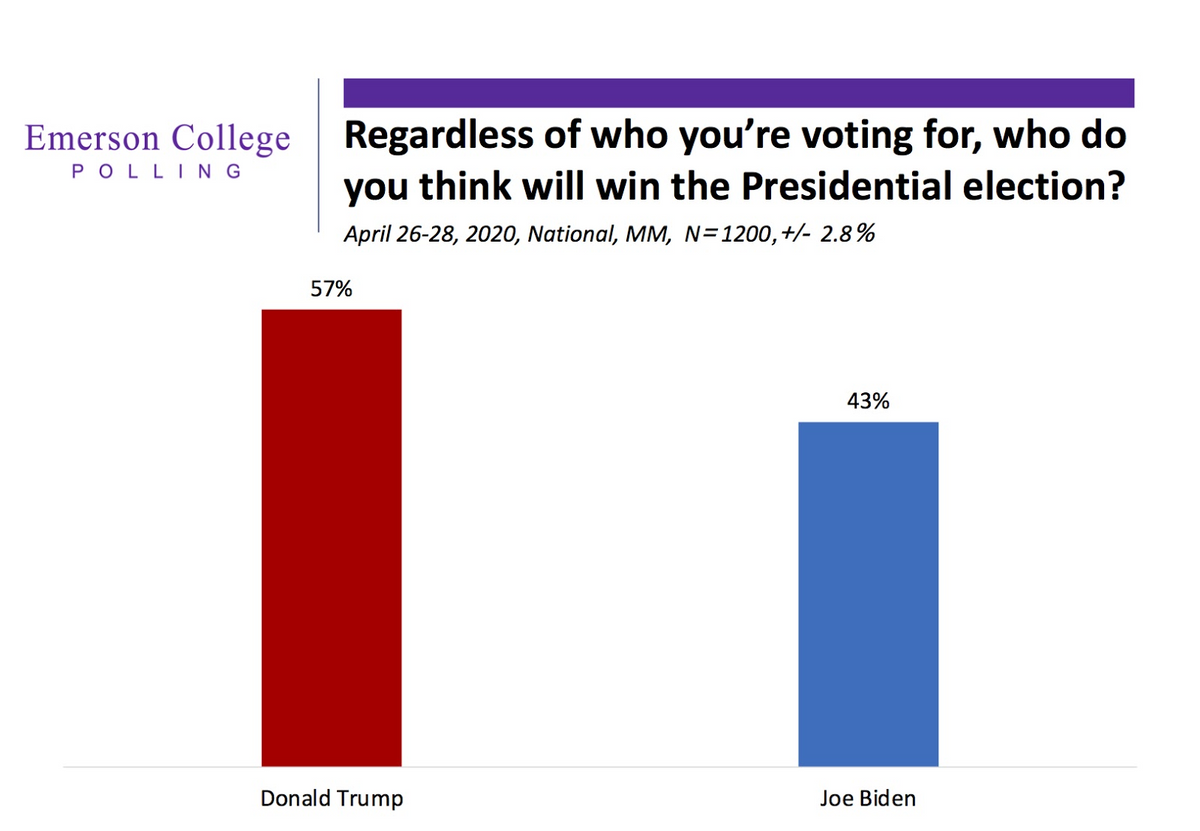 Trump’s supporters have legendary loyalty and have stuck with him through the impeachment process and in the coronavirus fight. Both should have also energized his critics to vote him out of office.

But the Emerson voting enthusiasm numbers show that isn’t the case.

Emerson found that Trump has a sizable 19-point advantage in the enthusiasm gap, 64%-45%. Some 36% of his supporters said they are “extremely excited” to vote for Trump, 28% said they are “very excited.” For Biden, those numbers are 22% and 23%. 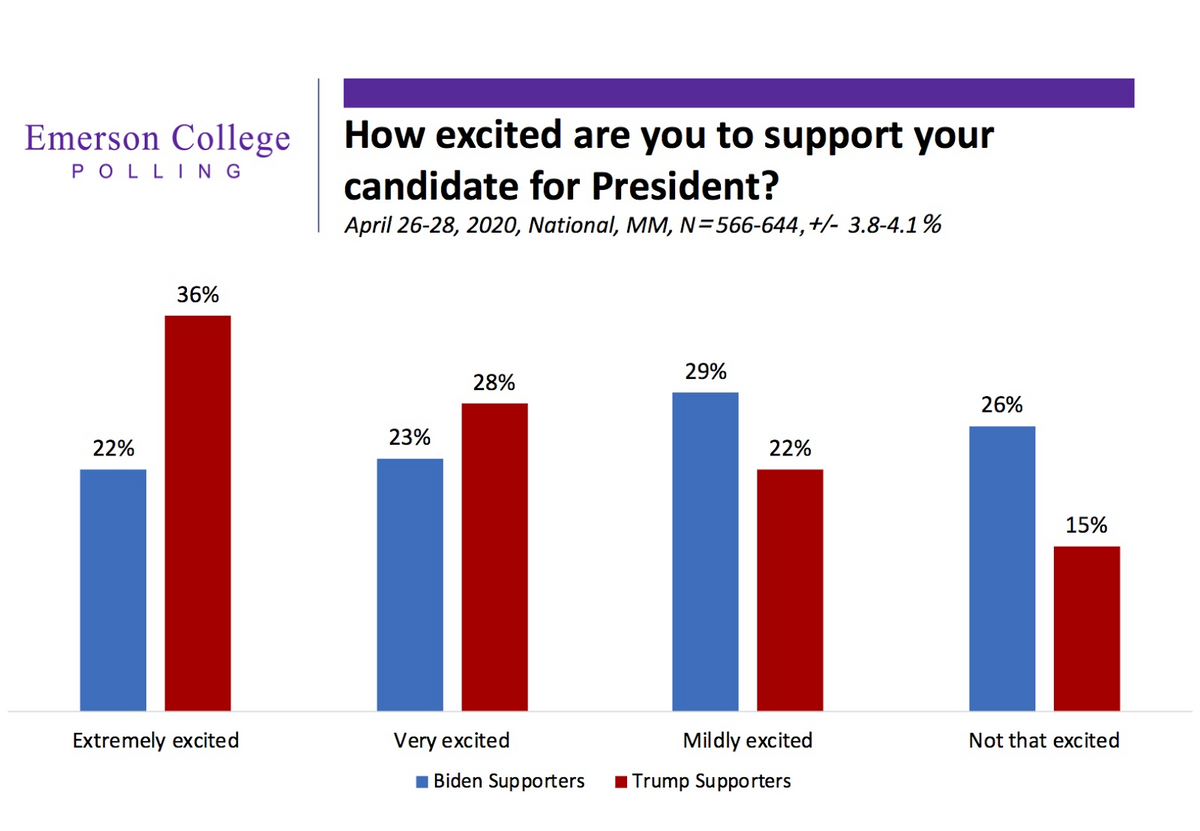 That 19-point enthusiasm gap dwarfs the one between Clinton and Trump in 2016. A September 2016 CNN/ORC poll put the gap at 12 points.

And it's not just Emerson. Rasmussen Reports said today that a sky-high 60% are excited about a Biden-Trump matchup, far more than the 2016 Clinton-Trump battle. It found an 18-point enthusiasm gap between Republicans, 75% excited, and Democrats, 57%.

Other polls have shown that supporters of former Democratic presidential candidate Sen. Bernie Sanders aren’t on the Biden bus. Emerson found similar results. The poll analysis said, “65% of those who voted for Sen. Bernie Sanders in the primary season said they were not that excited for Biden.”

The group Latino Decisions told us that 1 in 4 Hispanic backers of Sanders feel that Biden is an “unfavorable” candidate. “Biden’s record in politics is proving to be a major setback,” said the group’s Anais Lopez.

That was bolstered by a YouGov survey that found more than half of Sanders supporters have an unfavorable view of Biden.

The polling outfit also said that while Biden is beating Trump nationally, he’s only at 47%.

To fix that, and even push off a potential liberal third-party challenger, Emerson Polling Director Spencer Kimball said that Biden needs to call in the cavalry.

“While Trump is struggling to handle the coronavirus epidemic, it appears Biden has his own image issues with voters and may need help from former President Obama on the campaign trail to try and transfer the positive image voters have of Obama to Biden,” he said.

President Trump’s roller coaster approval ratings are back to their all-time high, this time thanks to the record support of independents, a group he needs to win reelection but has struggled with.

The latest Gallup survey found that 49% of adults approve of the president’s job, up from 43% two weeks ago. Trump has never crossed 49% in the Gallup survey.

The pop came despite crushing media criticism of his fight against the coronavirus and push to reopen the economy.

But it also came as the stock market was signaling support, and many in the United States joined with his call to get the country back to work.

Trump campaign deputy press secretary Sarah Matthews told Secrets, "Americans want to see their president out front and leading in a time of crisis, and that’s exactly what President Trump is doing. He understands these are challenging times for the American people, which is why he has left no stone unturned and unleashed an unprecedented, whole of America approach to defeat this virus."

Helping Trump, said Gallup, was the support of independents. “Most of the variation in Trump's recent job approval rating is among independents.

The polling outfit put the Trump approval rating turnaround in a story about America’s split opinion on his handling of the coronavirus effort. For that, 50% approve, 48% disapprove. 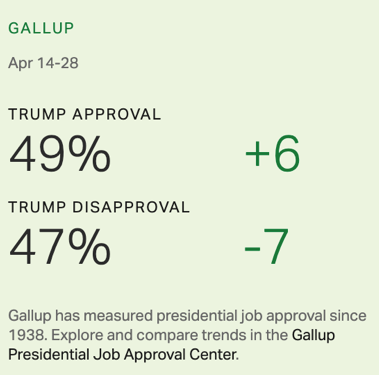 On a side note...  I think Mika on MSNBC this morning "evaporated" the remainder of the enthusiasm concerning Joe Biden.  The dimms need to come up with better candidates.

We will see, these polls are as volitle as the stock market, day to day.

Trump was down to 42% last week when he opened his mouth about injesting chemicals or uv rays into peoples body.

Truth is, Trump has never been above Nixon in approval ratings, and Nixon had the dignity to resign.

So you want the Dems to have a better candidate  than Biden. How about they choose someone who has assaulted more women. One poster said Trump was ay 25 and you support him. Would 30 be ok.

Watching FOX every program was about Biden and this women so the enablers got their marching orders. From Ukraine to women, and the enablers do not blink an eye.

This is ironic. What Biden did this morning was to be honest, open, and saying that women must be believed, then to investigate when they come forward.
Joe said to look into this, it was not true,

I did not do this. What he did was to throw down the gauntlet and challenge trump to do the same for his accusers...

but we know that trump is not man enough to do that.

3 Kudos
255 Views
0
Share
Report
Reply
Turn on suggestions
Auto-suggest helps you quickly narrow down your search results by suggesting possible matches as you type.
Showing results for
Show  only  | Search instead for
Did you mean:
Users
Announcements