Came across this ad from 1974 in American Home magazine.  I post it here because, why not? 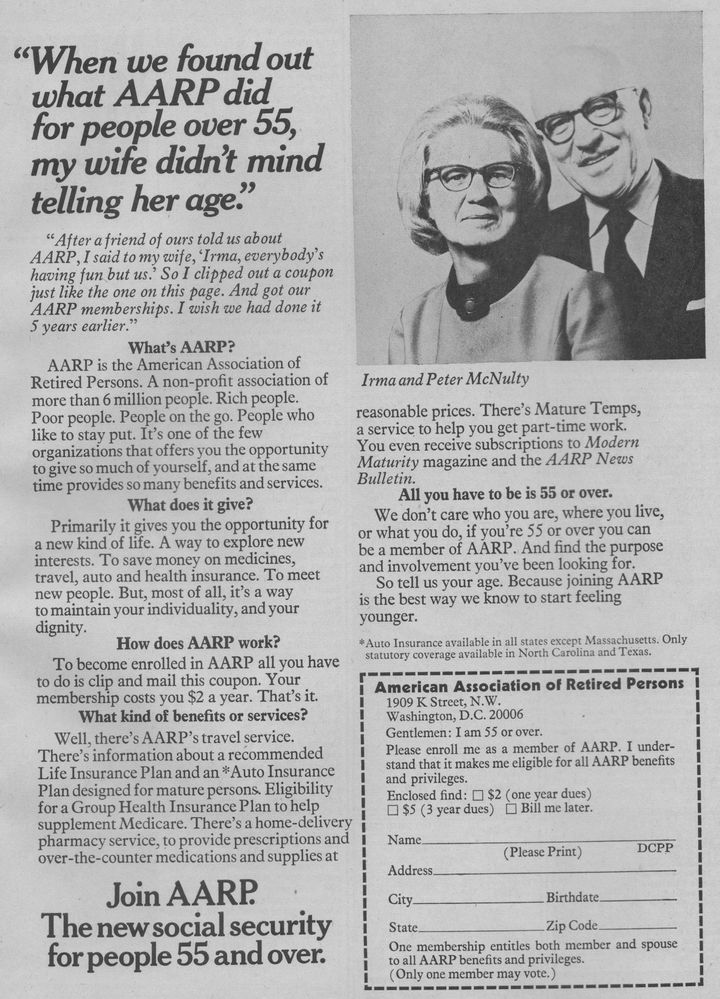 Aren't Irma and Peter adorable?  And they're still with us, too — Irma's 107 and Peter just celebrated his 112th birthday!  Happy birthday, Pete!

I mean...I don't know that they're not with us. I certainly hope they are still with us. Though it does seem unlikely, doesn't it?

$5 for three years of dues! Such a deal!

As I've mentioned to a pal here on AARP, I've got a weird thing about old magazines. I love 'em! I pick 'em up whenever I find 'em!

You can see why.

It's mostly the ads. They're usually more interesting than the articles.

As for our AARP full-page ad, even the copy for the ad features verbiage we probably wouldn't see today: "Poor people!" "Gentlemen!"

Today, in 2021, there are still poor people! And gentlemen! I qualify for both categories! Shh!

It also mentions Modern Maturity, AARP's magazine that was rebranded in 2003 as AARP: The Magazine.

Myself, I remember seeing Modern Maturity in my grandmother's magazine rack in the 1970s and 1980s (and doing the search-a-word puzzle therein).

As for American Home, the magazine in which the above advertisement appeared, it folded three years later, in 1977.  I speak for all of us when I say it is much missed.

"There's Mature Temps, a service to help you get part-time work" the ad proclaims. I did one of them Google searches on "Mature Temps."  Surprisingly: 85,200 results. I did not research each one. Most seem to reference much more recent businesses that have nothing to do with AARP's program from the early 1970s.

But I'm not done pokin' around. Stay tuned.

In the meantime, aaah, it's a neat old ad to look at.

When it comes to tv hillbillies,

Jethro, only one left,

worth fifty mil, some heft.

I know, I should get my brain examined. 😜

@AvocadoDog ,  Thank you.  If you give me such tasty morsels of interesting info, it's fun to see what can become of it. A little warped usually! 😜

Hi @AvocadoDog Peter McNulty looks a little like Milburn Drysdale on the  "Beverly Hillbillies," and Irma McNulty ( if you squint, and use a lot of imagination ) could be an older Jane Hathaway.  My dad went to college with Max Baer Jr. ( who played Jethro ) at Santa Clara University, and turned out to be a very bright guy, who did well in business.   Thank you for the ad, and now if I could get that song out of my head, "Listen to the story about a man named Jed . . . "

"That reminds me — Miss Hathaway! See to it my membership in AARP is renewed!"

"Ah was in AARP 'fore we moved to Beverly Hills, Miss Jane!"

"Oh, Jethro, I think you must be mistaken — you're far too young!"

"Too young to be a member of the Academical Alliance of Ritin' Perfectly? Teacher didn't nominate me 'til I repeated the first grade twice — an' by then I was fourteen!"

Neat that your Dad went to college with Max Baer, Jr. Was that before or after the show? Or during?

Yeah — I'd heard he did pretty well for himself in business and investments, etc.

@AvocadoDog  This is awesome! I can’t believe you found it. Yes, Irma and Peter are adorable! Thank you for sharing!

2 Kudos
2,712 Views
0
Share
Report
Reply
Turn on suggestions
Auto-suggest helps you quickly narrow down your search results by suggesting possible matches as you type.
Showing results for
Show  only  | Search instead for
Did you mean:
Users
Need to Know