Just watched "I Care A Lot" on Netflix.

I wouldn't have thought it'd win any major awards but star Rosamund Pike nabbed a Golden Globe for "Best Actress in a Motion Picture — Comedy or Musical." (Inexplicably, too, because unless you have an extremely dark sense of humor, this is no comedy. But Pike is very good in the role.)

The film grabbed me from the get-go and I think the theme might resonate — however negatively! — with some AARP members. 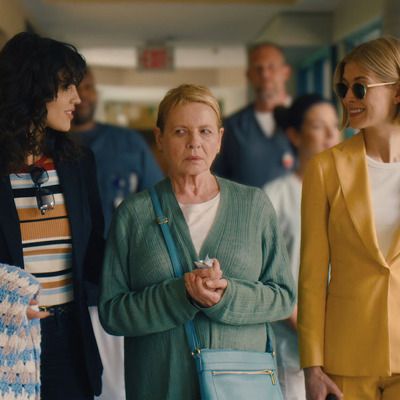 Dianne Wiest being led down the garden path...

I can't remember when I had a more visceral reaction at the very onset of a movie — the main character, Marla Grayson (Rosamund Pike), is utterly detestable from her first scene. In fact, aside from Dianne Wiest's character, there's really no one to root for. I stuck with it because it was so compelling and I was counting on some serious comeuppance.

Spoiler
You'll have to wait 'til the very end for any such karmic payback.

From Wikipedia: "The film follows a court-appointed guardian who seizes the assets of elderly people for her own, only for her to get mixed up with a dangerous gangster."

And from a review excerpted on Rotten Tomatoes: "I Care A Lot is a damning indictment of the corruption that pollutes the courts, healthcare, for-profit elderly care and, most of all, state-sanctioned guardianship, which strips the elderly and disabled folks of their agency."

Anyone else seen it?

It makes me wonder how accurately the legal guardianship details are depicted — and if there is any truth to it, well, then that needs to be AARP's next crusade!

I presume things were exaggerated for effect. It's a movie; it must be fiction, right?

Dianne Wiest plays an elderly woman who is quickly hustled into a nursing home completely out of the blue while sitting down to enjoy her afternoon tea. While that whole sequence seems unlikely, it's infuriating to watch and had me wondering, "Could this actually happen?"

Still, it's a fairly enthralling crime movie that doesn't quite rise to the mantle of "guilty pleasure" for me only because such a film would needs to be even more over-the-top. Perhaps my uncertainty of the legalities of guardianships prevented me from enjoying this as just the crazy movie it is and instead had me wondering when they might be coming for me...

1 Kudo
2,560 Views
0
Share
Report
Reply
Turn on suggestions
Auto-suggest helps you quickly narrow down your search results by suggesting possible matches as you type.
Showing results for
Show  only  | Search instead for
Did you mean:
Users
Need to Know