The weather is getting colder for most of us ❄️ I've found myself in the kitchen quite a bit as cooking helps me relax and recharge. The pandemic has been so difficult, but cooking brings me such solace and pleasure. It's a rare piece of joy these days. I love eating good food and sharing it with my partner, who I'm so lucky to have! What are you making now? Have any favorite late fall/winter-time foods you are preparing?

I always make chili 🍲 This year I decided to try ground lamb since lamb is a high-quality protein source and you can easily get lamb raised in the US. I made an Indian curry that had serious chili vibes. It was SO GOOD 🤤 I wish I had taken a photo. I also recently made a lamb ragu pasta and added collard greens that I had sauteed Brazilian style (over med-high heat with red-pepper chili flakes) for the veg. My partner and I also braise cabbage quite often and store the leftovers to eat throughout the week. Lately, we've been using a light beer, rice wine vinegar and liquid aminos or soy sauce as the braising liquid. It's tasty, satisfying and fairly healthy. I'm also obsessed with all of the winter squash and often am roasting it. I save and toast the seeds too - they make yummy snacks or salad toppers!

Share your favorite cold-weather kitchen creations and recipes! Bonus points if you have some drool-worthy photos 😊

I like to make my Homemade Chicken & Dumplings or my Grandaughter's favorite, Chicken Pot Pie. So yummy & easy to make.

I like to mix up a pot of my famous piping hot chili.

Why don't you give us the recipe?

But, that reminds me.  There used to be a restaurant in my neighborhood named Bishop's Famous Chili.  It still exists elsewhere, but, it is too far away for me.  See:

The funny thing is that it's not really chili in the conventional sense, but, it is so good that nobody complains.  It's sort of a garlicky lentil and meat soup.  As I recall, there are no beans or tomato in it and the meat is fibrous like pulled pork (maybe, I am wrong because I last ate it 30 years ago).  I wish I had the recipe.

As soon as fall hits, I make a ton of roasted butternut squash soup.  I throw in some mushrooms, onions, garlic, and a handful of whatever veggies I have lying around.  Roast them with salt, pepper, thyme, and a little hot pepper flakes.  I use chicken broth, but a little swirl of cream added at the end is delicious.

I do freeze it in single servings, without the cream.

I would love to have some hot Chicken soup in the cold weather followed by a tea!!

Nopales casserole! This is simply traditional green bean casserole but the beans are replaces by sliced up cactus pads. I also add a bunch of garlic. So good! Also, very good for you. There's a bunch of great scientific research on the health benefits of both prickly pear cactus pads and garlic. Let food be thy medicine. 😉

Chicken noodle or cream of chicken soup.  I don't have the energy for elaborate cooking so I resort to easy hacks of processed foods.  For example, I sometimes dilute Campbell's condensed chicken soup with chicken bone broth instead of water (bone broth has no salt).  And I season it with a speckling of grated frozen Carolina Reaper peppers that I grew in my garden 5 years ago.  Carolina Reaper held the World's hottest pepper record.  They are easier to grate than frozen Ghost peppers (which I also have) because Ghost peppers are relatively thin walled and hollow.

Here is my easy hack for frozen fries: 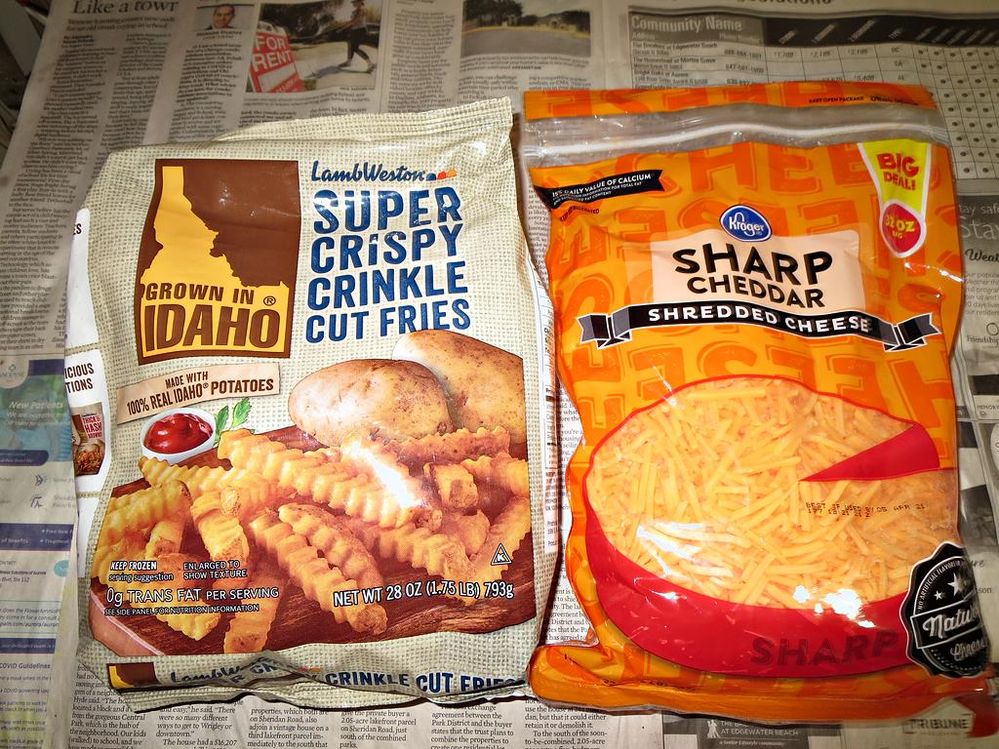 Cook according to directions but on parchment paper because melted cheese doesn't stick to parchment paper.  Then sprinkle with shredded cheddar cheese: 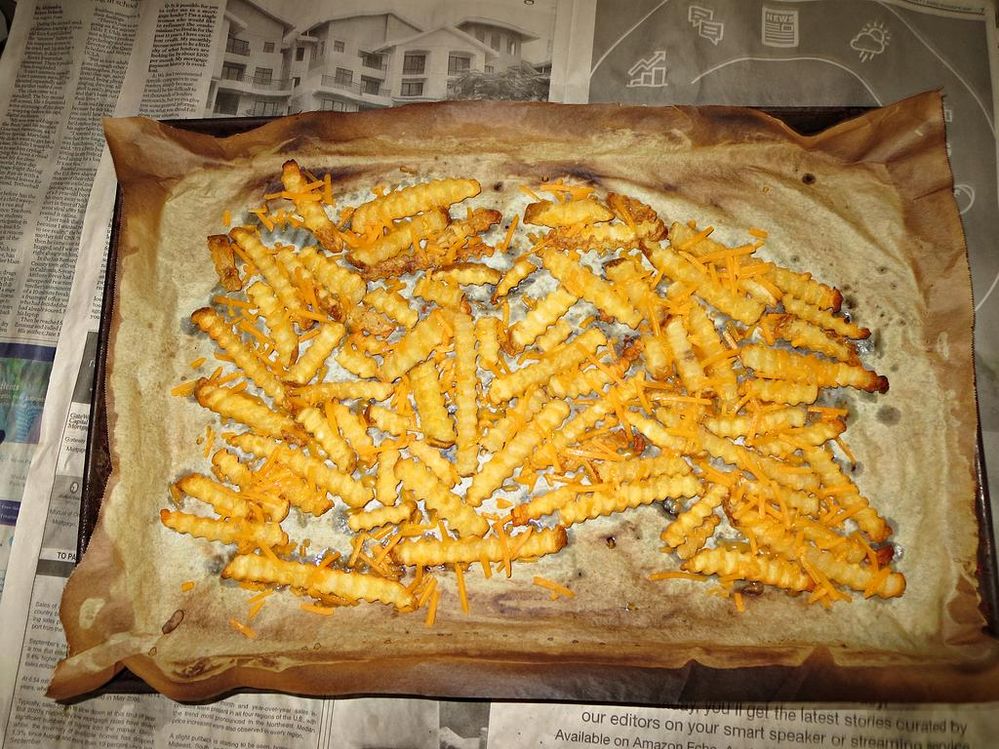 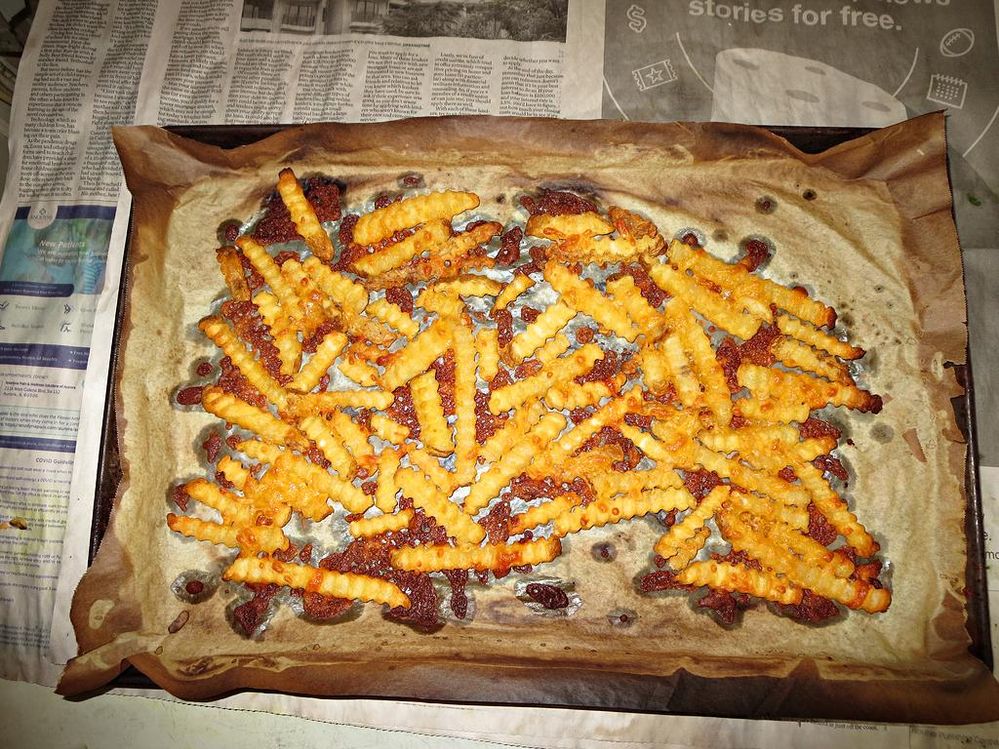 Flip over with a metal spatula because it looks better: 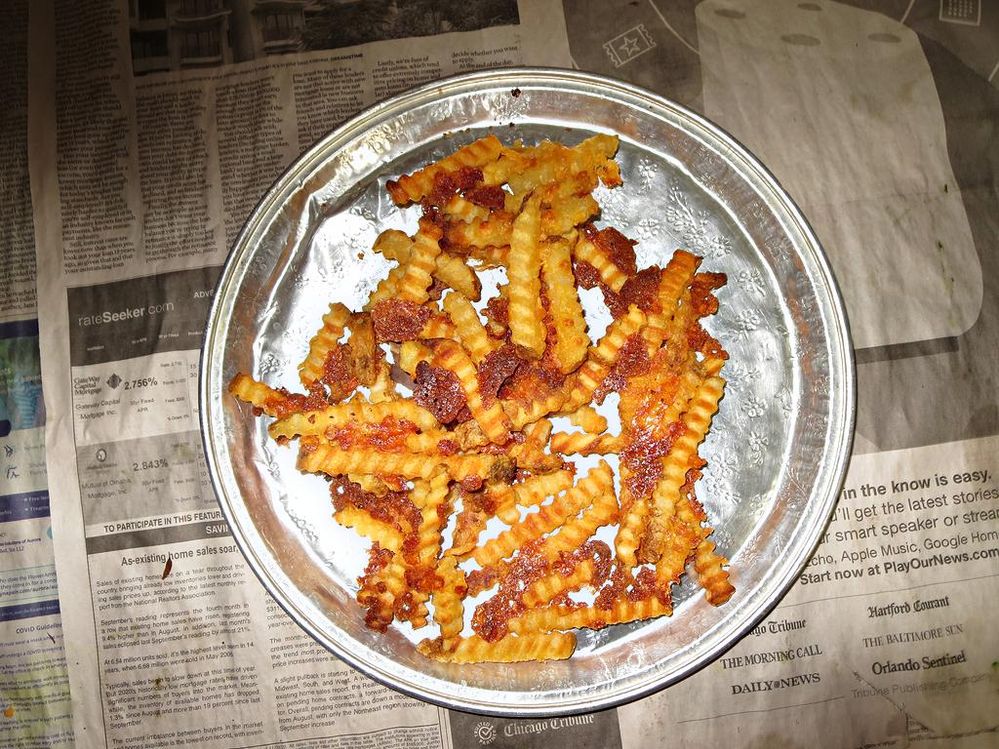 Somehow, the newspaper tablecloth(?) makes these look even better.  Any food that's served on or wrapped in newspaper is automatically delicious. I mean, try serving fish and chips without newspaper! In fact, I understand that the fish & chips industry is the only thing keeping the few remaining print newspapers from going completely under!

However, if I might make a suggestion as to your above dish...?

You can never have too much cheese, so next time, reverse the whole thing and try a bed of cheese with a speckling of fries on top.

3 Kudos
6,081 Views
0
Share
Report
Reply
Turn on suggestions
Auto-suggest helps you quickly narrow down your search results by suggesting possible matches as you type.
Showing results for
Show  only  | Search instead for
Did you mean:
Users
Need to Know