Views Missing From All Topics Posted

Views Missing From All Topics Posted

I'm not seeing number of views each posted topic is receiving😯  Is anyone else experiencing this issue?

Please let me know if you see number of Views?

Teri have you had any luck with getting Promo code Box & Views set for mobiles? Thanks

Jolene & I discussed this issue on another thread so

I can see as should/normal if on PC

Hopefully they'll get the sizing reset for mobiles soon 😞

Ginger, I hope it's easier to fix than Transaction History😆

@mi4090  I don't know if it it something that was fixed meanwhile since your post, but I still see number of views listed at the top right of the messages, like "Message x of y (z views)"

I am viewing on a desktop, so it may also be different on a mobile device.

I also noticed number of views for each topic is not being posted. The Black Banner Dashboard and Transaction History are now working. Hope you were able to view.

Jolene, I believe you understand that I mean Views on each posted reply.  Yes my black banner is working.

Ray, I see the Views on the Forums list of topics before clicking to see reply.  # of Views was in bold black writing in bottom right corner of each reply, letting you know how many had seen your reply.

@AARPCaroline could you please let us know what happened or has Management noticed the problem yet?

I meant the views in each message/reply. Here is what I saw for your reply:

As a test, I reduced the size of my window to see if it can emulate the view of a mobile device, and the view turned into this:

The view stat is gone. This seems just like the issue with the Promo Code field.

What happens if you view the screen 90 degrees turned? Does it appear again?

Ray, thanks for the screenshot😊  That's not appearing on any replies I'm receiving.  Rotating the device worked😉

I wonder if they no about it?  Management is this some new issue with rotating now?  Thanks😊 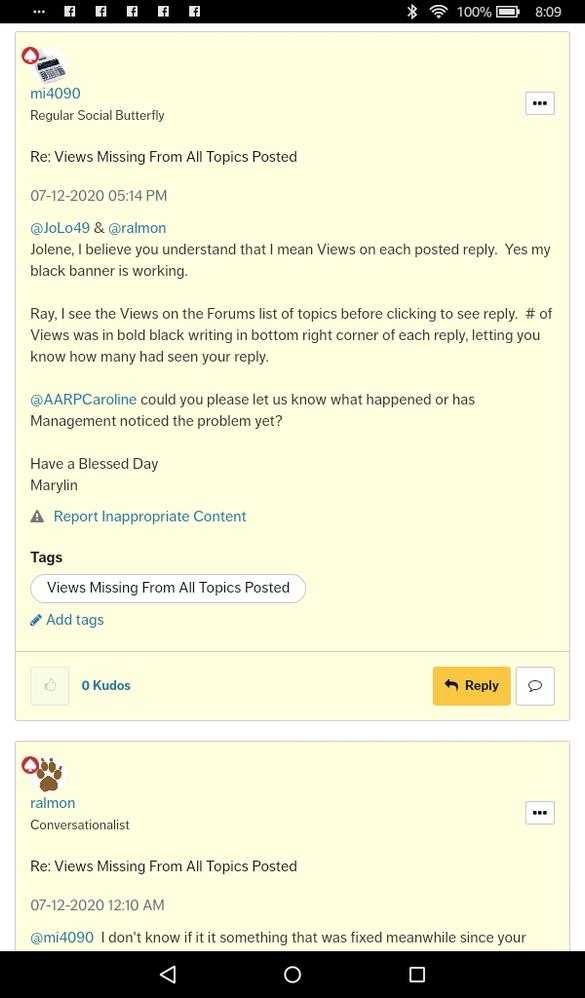 2 Kudos
6,338 Views
0
Share
Report
Reply
Turn on suggestions
Auto-suggest helps you quickly narrow down your search results by suggesting possible matches as you type.
Showing results for
Show  only  | Search instead for
Did you mean:
Users
Need to Know