Maybe people will stop asking if mine is a coyote, wolf, velociraptor, etc.

On 1/29/2019, the United States Postal Service announced a four-stamp set planned for release later in 2019 entitled “Military Working Dogs”. Each block of stamps features a stylized depiction of the 4 most commonly used breeds by the military (German Shepherd, Labrador Retriever, Belgian Malinois and Dutch Shepherd) with backgrounds of red, white, blue and gold to represent the American flag and patriotism. 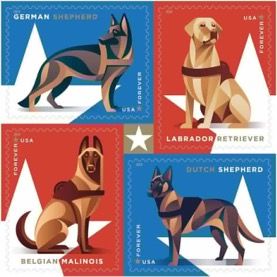 Yep, the striped one is mine.DS.

And yes, after long days/nights, I'd still like to swing these hunks of glass , plastic and silicon against the nearest wall Come on retirement!
3 Kudos
1,867 Views
1
Share
Report
Reply

0 Kudos
1,836 Views
0
Share
Report
Reply
Turn on suggestions
Auto-suggest helps you quickly narrow down your search results by suggesting possible matches as you type.
Showing results for
Show  only  | Search instead for
Did you mean:
Users
Need to Know