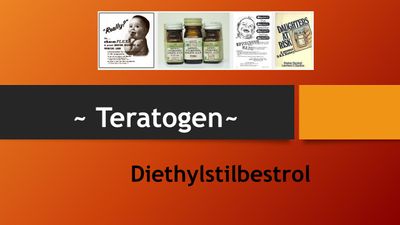 Diethylstilbestrol (DES), a medication used from the 1940s–1970s to prevent miscarriages in high risk pregnancies, is the best proof of principle supporting the developmental basis of adult disease hypothesis.
DES has been shown to cause an increased risk of vaginal, uterine and breast cancer in humans and animal models. It has also been shown to cause uterine fibroids in mouse models and DES-exposed women.
NIEHS researchers also found that the adverse effects of DES in mice can be passed to subsequent generations, even though they were not directly exposed. Researchers have also linked developmental exposures to a variety of environmental chemicals to increased susceptibility to infertility, endometriosis, uterine fibroids, obesity, neurodegenerative diseases and cardiovascular and lung diseases.
There are also some data suggesting that infertility due to environmental exposures during development can be transmitted up to four generations after exposure.
These studies indicate that a person’s fertility may even be the result of what her great grandmother was exposed to while she was in utero, suggesting again that what a woman may be exposed to during her pregnancy can affect the fertility of her children, grandchildren and great grandchildren.
Mechanisms involved in the transmission of the altered programming due to exposures during development have been shown to involve epigenetic events or changes in gene function that occur without a change in the DNA sequence.
http://www.niehs.nih.gov/health/assets/docs_f_o/linking_early_environmental_exposures_to_adult_disea...
The DES Tragedy Continues…
#Diethylstilbestrol
#TheDESTragedy
DESInfo411@gmail.com
KMFDallas
0 Kudos
2,068 Views
0
Share
Report
Reply
Turn on suggestions
Auto-suggest helps you quickly narrow down your search results by suggesting possible matches as you type.
Showing results for
Show  only  | Search instead for
Did you mean:
Users
Need to Know