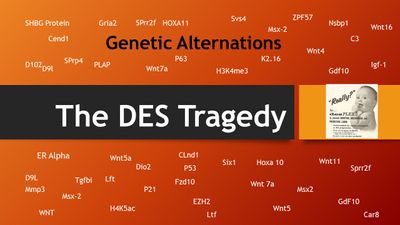 From 2009 to 2011, I suffered a series of bad falls and painful fractures – all requiring long recovery periods and a lot of time spent in a boot with crutches. My ribs seem to be especially fragile. I fractured multiple ribs 2010, 2012, 2013, 2016, 2017 and another just before Valentine’s day 2020 . 18+ fractures and counting….Recovery is long and painful, especially trying to sleep. In 2012, I saw my rehab physician again, who said, “I don’t know why you are breaking so easily!”

As I mentioned earlier, I am a DES Daughter. Throughout life I have experienced reproductive and infertility issues. DES Researchers have now noted the link of DES Exposure to skeletal effects. Another facet of the many body systems affected by DES exposure.

I believe that DES affected my skeletal structure before I was born and have had lasting effects. Knowing the reason why I have osteoporosis and brittle bones helps, but it does not change the difficulties I face. One is “The FEAR of Falling.” After a few falls, which resulted in fractures that fear is always with me.

KMFDallas
0 Kudos
2,316 Views
0
Share
Report
Reply
Turn on suggestions
Auto-suggest helps you quickly narrow down your search results by suggesting possible matches as you type.
Showing results for
Show  only  | Search instead for
Did you mean:
Users
Need to Know