My Grandfather - Part of the first Black men to integrate the Marine Corps.

My Grandfather - Part of the first Black men to integrate the Marine Corps.

My grandfather, who I knew as Papa was a tremendous family man, farmer, barber, and a grandfather who made me feel like I was the most important person in the world. Little did I know growing up that this quiet man had volunteered to be one of the first black men to integrate the Marine Corps. In a world filled with racism, what he endured and how he served is immeasurable. His story is below.Willine Stewart 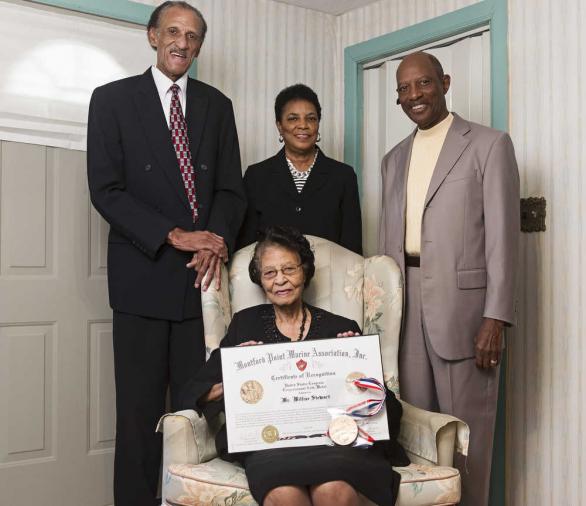 Willine Stewart was known by many as a stoic man who spent his free time sowing seeds and trimming hair in the backyard of his North Augusta home.Many were not aware that he belonged to a special band of brothers – the first black men to integrate the Marine Corps.

Twenty-five years after his death, the private first class is finally being recognized.

In June 2012, the Montford Point Marine joined an esteemed group of Congressional Gold Medal recipients for his service during World War II. His family accepted a replica of the medal on his behalf in an Atlanta ceremony last month, and Stewart’s former church, Old Macedonia Baptist in North Augusta, honored the former deacon in a service last week.

Stewart and his colleagues were the first blacks to enlist in the Marines after an executive order by President Franklin Roosevelt.

Unlike their white counterparts who trained at the Marine Corps Recruit Depot in Parris Island, S.C., or Camp Pendleton in San Diego, the black Marines trained at Camp Montford Point, a facility at Camp Lejeune, N.C., from 1942-49, according to the Montfort Point Marine Association’s Web site.

The association estimates that 20,000 black Marines were trained at Camp Mont­ford Point during those years.

About 13,000 of those Marines served in overseas units during the war. More than 2,000 helped capture Okinawa.

“One of the guys said that he felt safer on the battlefields than he did in North Carolina because of the treatment they received,” she said.

Willine Stewart, among the first to arrive at Camp Montford Point in 1942, saw action in Guam, Saipan and Okinawa, places that his son, Linwood Stewart, has visited. Just standing where his father stood during a time of war was sobering, he said.

The exploits of his father and the other Montford Point Marines were what inspired him to join the military.

“It was interesting just to be there and say, ‘This is where my dad was at one time,’ ” said the retired Air Force lieutenant colonel.

Willine Stewart never spoke much about his military experience. Even after his death in 1989, an obituary in The Augusta Chronicle only briefly mentioned his service.

His son Arthur Stewart said it was his later part of his life people knew best.

A native of Edgefield County, S.C., Stewart returned to the Augusta area after the war to raise five children with his wife, Christine, whom he met while attending services at Old Macedonia Baptist.

Mozelle Stewart said her father, discouraged by his treatment during the war, was determined to give his children what he never had: a proper education. All five children would go on to earn at least a bachelor’s degree.

Stewart worked at Augus­ta Arsenal until its closing and later served as a heavy-equipment operator at Fort Gordon until his retirement.

He kept a small garden in his backyard and would sell his harvest to neighbors. Some of the neighbors would return to his garage later in the day for a quick haircut, a skill he had picked up during his military career.

Solve your favorite crosswords on AARP Games to earn AARP Rewards points. Try your hand at the Daily Crossword, the Mini Crossword, and Let’s Crossword, the new member game you can play with family and friends. Play Now.
Latest Comments
Latest Entries
Labels