A Personal Tribute to My Mother

A Personal Tribute to My Mother

That was a painful and tearful outing for me, and a powerful reminder of how much Dr. King, and those who worked with and supported him, said and did to pave the way for the life I live today. Certainly, Dr. King, or any of those who planned, organized and marched with him, would be fitting subjects for a tribute to an ancestor. 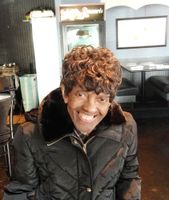 But my tribute is much more personal. It is a tribute to my mother, Edith Dotson, now 91 years of age. Separated and later divorced before my teen years, as a single Mom she not only raised me, my brother and my sister, but also her granddaughter, two great grandaughters, one great, great grandson, and one great, great granddaughter. There is much about which I could give a tribute to my mother. But here's what rises to the surface as I write.

We were poor growing up, and once Dad left it was even harder to make ends meet. But Mom was resourceful. For example, when there wasn't enough money to pay the electric bill, Mom would heat the house by boiling water on our gas stove so the steam would keep us warm. And Mom was a great cook. When we were lean on food, Mom knew how to take simple ingredients and make a meal for the family, like when she would sometimes make us ho cakes for breakfast.

Mom was also worked tirelessly to provide for us. It brings tears to my eyes when I think about one of the jobs she worked to provide for us - scrubbing floors at a large office building. But she was not too proud to do that work for us. And work was not all she did to provide for us. Later, when I became an adult, I learned that one Easter season, Mom took money she could have put toward taking Dad to court to pay child support he was neglecting and instead made sure we children all had new outfits and were sharp for church that Easter. She regularly sacrificed and gave of herself for us.

Mom also placed a high value on education. In the home, she emphasized reading and taught us to recite flawlessly from memory poems and other passages. We were encouraged and prepared to speak in public before audiences of hundreds. Mom also introduced us to God and faithfully engaged us in church from day one. And this was not just for our family, but for countless children and youth who passed through her Sabbath School classes at church.

Mom supported education beyond the home and church as well. Having no colleage education of her own or money to support mine, she still always encouraged my dream to go on for higher education. Not once ever did I receive any message from her - verbal or nonverbal - that it was unrealistic, out of the question, or not for people like me. Rather, she supported my dreams and my journey.

The legacy Mom still lives is a legacy of love - not a simple four letter word that is so oft used today for everything from pizza to a new outfit, but a love that truly reflects the words of this New Testament Scripture: "Be devoted to one another in love. Honor one another above yourselves." (Romans 12:10 TNIV) Mom has invested this kind of love in four generations of the Dotson lineage.

There is no holiday set aside for my dear mother, or monument or museum named in her honor. But in my life, she is and remains a living monument to the true meaning of love and is a living example of a person who has made a difference in the lifes of ations of African Americans/Blacks.

cabradley
Tribute to my mom Dorothy Harris & my grandmother Ethel Greer...they were my rock!