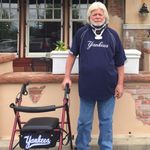 This was not my idea, but I wish it were. My Priest, last year during Lent, proposed that instead of "giving something up", that we start by not using The Lord's name in vain. Since I have three young Grandchildren, I am using that as my New Year's resolution, and taking it a step forward. I have preety much taken care of the initial problem, but now I am working on cursing altogether. Especially the F-Bomb, which my son throws around constantly, even around his son. I keep reminding him when he does, but I have a hard time keeping it in myself. So, there you go, my New Years Resolution.